Home » About Us » Our History

Thunderbird Aviation is a Twin Cities institution, and if you were raised here, chances are good you’ve taken a ride in one of our aircraft, as a student pilot, aircraft renter, corporate charter customer, or as part of one of our numerous charity air rides. For those Minnesotans that love the thrill of airports, Thunderbird has long been known as the best place to watch planes take off and land during a lunch break or on a nice weekend day.

Our Company is one of the oldest commercial aviation operations in the Midwestern United States. We pride ourselves in our ability to continually grow our business and provide a stable environment for our employees. Without question, aviation is a tumultuous industry, and Thunderbird has continually thrived given our financial discipline, consistent leadership, and ability to innovate. Our Company is meeting the challenges facing our industry head on and we are well positioned to take advantage of additional growth opportunities in the marketplace.

Thunderbird’s founder, Albert Grazzini, was born and raised in Minneapolis, MN. A World War II veteran, he was stationed at the front lines in the European theatre staffing a parts depot in Italy. His role was to keep the B-24 Liberators flying by providing much needed rebuilt parts. This is where our founder was introduced to flying and learned about aircraft maintenance.

Upon his return to Minnesota, Mr. Grazzini went back to work for his family business, and, while working, pursued his education, receiving a business degree from St. Thomas College. During this time, he also started a family and discovered his skill for numbers. While his career was taking him towards accounting, his passion was for flying.

During the 1950s, Grazzini was the owner of a local accounting firm and flew as often as he could with his brother-in-law and cousin, both of whom were attached to reserve units based out of Minneapolis and St. Paul airports after the war. The opportunity to start Thunderbird arose from one of Grazzini’s accounting clients, who was a member of a flying club at Flying Cloud Airport. The club was in financial trouble and Grazzini jumped at the chance to take control, pay off existing debt and set new rules for the club to operate under in the future. While managing the new business, as well as his other businesses, Grazzini still found the time to acquire his private certificate, instrument and multi-engine ratings.

Grazzini understood the commercial value of the flying club and in the early 1960s, he reorganized the business into a fixed base operation, or FBO, and renamed the business Thunderbird Aviation, Inc. Business exploded and opportunities in the industry were knocking on the door. Grazzini began a large-scale fleet renewal program, and expanded the Company’s product offerings to include airplane rental, aircraft sales and flight training. Given the growth in piston aircraft sales, Thunderbird pursued becoming a dealership for one of the growing aircraft manufacturers, choosing Piper Aircraft in 1965. Soon red and white Cherokee 140’s and Comanche’s began filling the ramp and by 1967, Flying Cloud Airport was ranked as the 7th busiest airport in the nation! 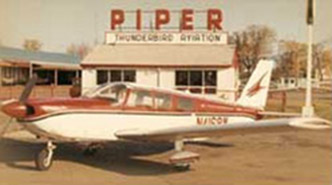 Thunderbird took full advantage of the growth in general aviation. The Company rose to be one of the largest Piper dealers in the manufacturer’s network. With sales growth came the need to build and acquire new hangars. At one point, Thunderbird operated two FBO’s on Flying Cloud Airport, Thunderbird West and Thunderbird East. 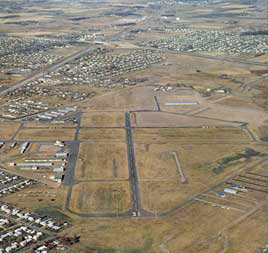 In the 1970s, the need for corporate travel far outpaced the need for recreational transportation. Thunderbird Aviation was one of the first operators to receive a FAR Part 135 Air Taxi Certificate. It was 1975 and at first, customers were flown in single-engine Cherokee’s. Soon, Piper Aztecs, Seneca’s and Chieftains were pushing the familiar Cherokees out of the hangar. More demand for performance was met with turbine aircraft and Thunderbird took delivery of a Cheyenne I. With close to 100 aircraft, operational expansion became a necessity. Thunderbird went on to purchase Lakeland Flight Services at Crystal Airport and started flight operations at Owatonna Airport.

With an eye on the national market, Thunderbird bought an FBO in Phoenix, AZ. Now with four FBOs and ramps full of Piper aircraft, Thunderbird Aviation was poised to grow even larger.

Thunderbird Evolves with the Marketplace

The 1980s can be characterized as the decade of fuel shortages, high inflation, and high interest rates. Environmental laws were changing and for those who owned underground fuel storage tanks, the potential liability was daunting. Insurance markets were drying up and to top it off the air traffic controllers were all fired.

Despite all of the problems, Thunderbird was still focused on growth. During this period, Mr. Grazzini, who had always dreamed of owning his own airline and was already a long time investor in local commuter airline ventures such as Gopher Aviation and Northern Airlines, creatively used his business experience and Thunderbird’s Air Taxi certificate to submit a proposal to provide scheduled service from the Twin Cities to Des Moines and Sioux City, Iowa. His plan called on using fellow business owners within the general aviation community to help support his venture. He received their support but the flying public was not ready to fly piston twins when they had just disembarked from DC-9s and B727s. The demands of trying to grow the business and maintain profitability across the existing lines of business was proving to be too much for Albert Grazzini, so after nearly thirty years as the pilot in command, he stepped to the co-pilots seat and let his daughter, Nancy, take over the business.

Nancy began to restructure Thunderbird by refocusing operations on the Company’s core flight training business. Thunderbird’s identity as a leader in flight training proved to be perfect timing for an influx of demand for new pilots. As regional airlines were growing pilots trained at Thunderbird were entering the job market quickly, further growing the business. Refocused, lean and continually ready to meet the needs of our customers, the Company entered the next decade well positioned for growth.

The 1990s would see Thunderbird Aviation take flight training to a new level. The competitive landscape was changing and local, independent flight schools were being replaced by well established and publicly subsidized universities for flight education. To meet this challenge, Thunderbird started the Academy College of Aviation. The new school offered a 2-year degree in aviation and provided financial aid to help with flying costs. Students no longer had to travel out of the State of Minnesota or even out of the Metro area to get an aviation degree.

As we entered the 2000s, Thunderbird continued to execute on its flight training growth plan. The Company opened a location at the Mankato Airport and continued growing the Academy College career flight training business. Thunderbird was taking advantage of the airline pilot-hiring wave when September 11, 2001 changed everything. Perhaps no industry was hit harder economically than aviation as the result of 9/11. New pilot starts never recovered and flight training proved to be a difficult stand-alone business. Luckily, Thunderbird proved, once again, to be an extremely adaptable business.

The Company successfully diversified into new lines of business, growing FBO Services at our Crystal and Flying Cloud locations and developing and executing on a new Aerial Services business. Recently, Thunderbird joined the Tecnam dealership network and entered the light sport aircraft marketplace to reach the recreational sport customer.

Thunderbird Aviation has continued to evolve and grow in the aviation industry.  In 2013, we opened our new executive facility at Flying Cloud Airport.  This premier FBO complex was designed to meet the needs of our diverse customer base in a modern and inviting setting.  The building embodies our brand promise, with a full service business center, conference facilities and lounges.  For flight students, our new training center provides a space designed to facilitate learning, with a complete testing center and classrooms.  Thunderbird’s maintenance and operations center in the heart of the new facility allows our teams to collaborate and work together as we continue to grow our charter and management business for clients from across North America.  In 2015, Thunderbird refreshed and grew our facilities at Crystal Airport, growing our flight training operations and began a training partnership with Cape Air, a large regional airline operating across the United States.

One of the core values of Thunderbird Aviation is our unwavering commitment to sound business principles. In an industry that has lower profit margins than the restaurant industry, complete with more risk and higher fixed costs, our continued profitability is a statement in and of itself. Our people make the difference and our ability to adapt and prosper in any economy demonstrates Thunderbird’s commitment to general aviation and provides our loyal customers with the assurance that we will be here in the future.